No matter how clean we keep our homes, no matter how big we build our barriers, household pests have a way of creeping in and making themselves comfortable.

Some are simply annoying; others can be downright dangerous. From spiders to lice, fleas to cockroaches, these little critters have a way of making their presence felt in a big way.

Wondering what creepy creatures you could be sharing your home with? Continue reading... 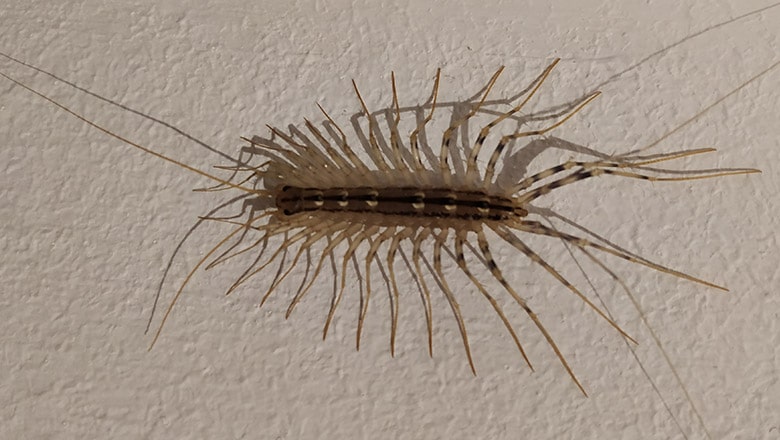 While they might not be the prettiest of creatures, the house centipede is actually pretty harmless. If you have any other pests in your home, they might even prove quite useful.

Centipedes prey on other insects and can make short work of any silverfish, carpet beetles, firebrats and other critters that have decided to make your home theirs.

Whether indoors or out, they thrive in cool, dark, damp conditions, with basements and bathrooms being their preferred environments. 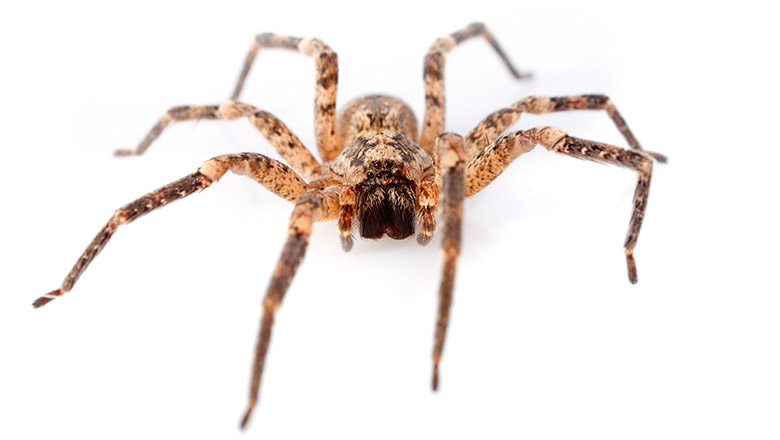 If you have any cracks in your windows or gaps under your doors, it’s likely you’ve occasionally played host to the odd spider or two.

In their search for food, warmth, mates, or moisture, spiders will make use of any entry point they can find (even if it’s barely discernible to the naked eye).

Depending on the species, they’ll either set up camp in dry, warm places such as the upper corners of attics and rooms, or the damp, dark, lower regions of the house.

Although most household spiders pose little to no risk to humans (and can even help keep other household pests to a minimum), some, such as the Brown Recluse and Black Widow, can be highly venomous.

Silverfish are one of the most common household pests around.

Recognizable by their tapered bodies, gunmetal coloring, and long, threadlike antennae, they can be found in almost any room of the house, from the attic to the basement (although they’ll usually seek out the darkest, dampest area of whatever room they land up in).

Silverfish are carnivorous in nature, as happy to dine on members of their own species as they are on paper, linen, and even cellulose. They enter the house through a myriad of ways, and once they’re in, they can quickly become an infestation unless promptly and efficiently taken care of. 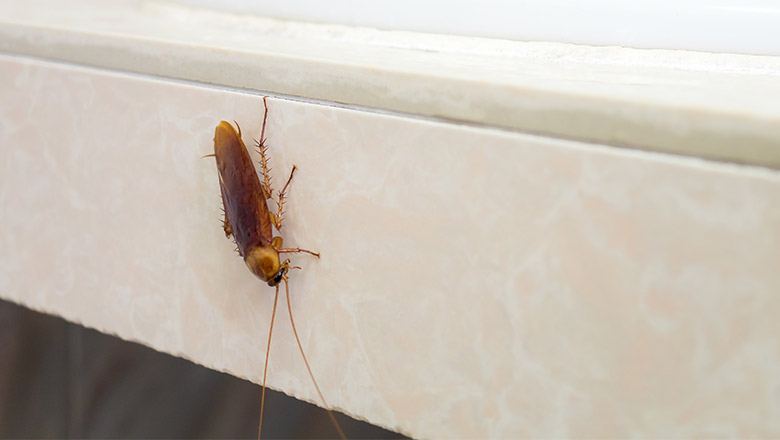 Cockroaches represent one of the most unwelcome household pests of all.

They come in five basic types: the American, Smokeybrown, Brownbanded, German and Oriental.

American cockroaches are the largest of all five, typically measuring between 1 and 1½ inches long.

The Smokeybrown is a little smaller (usually measuring around an inch) and can usually be found in gutters and attics.

The Oriental cockroach is about the same size as the Smokeybrown and tends to prefer very damp conditions like sewers or basements.

The Brown-banded and the German cockroaches are two of the smallest types and can easily be confused for each other by their similar appearance.

Unlike the other varieties, these two prefer to live indoors all-year-round (the others mainly live outside, venturing into homes only for food) and can get in via a multitude of ways, whether by boxes, purses, clothing, or used furniture.

Cockroaches are voracious eaters, munching their ways through everything from book bindings, food debris, paper, and even human flesh.

As they’re believed to be a transmitter for a range of bacteria, including salmonella, staphylococcus, and streptococcus, it’s vital to act quickly and mercilessly if you spot one. 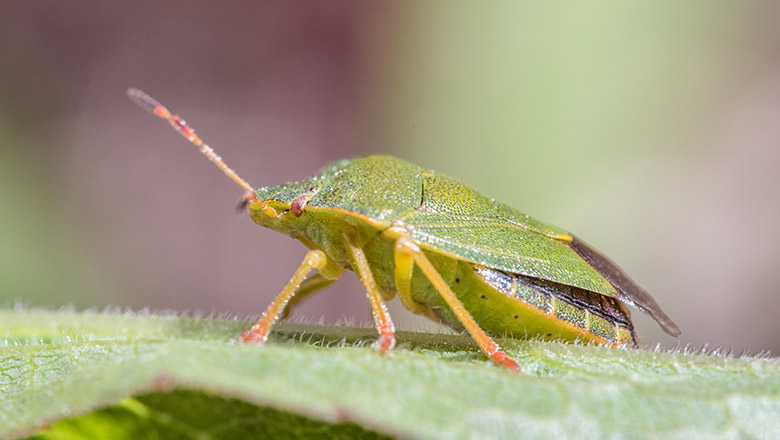 Thanks to their flat body shape, stink bugs can squeeze through almost any kind of crack to make their way into your home.

Although they tend to live outside during the summer months, the colder weather sends them scurrying indoors.

Although generally harmless to both humans and homes, stink bugs can be a nuisance if left untreated.

As their name suggests, they’re some of the smelliest creatures around, omitting an odor from glands between their legs that only gets stronger when they’re squashed. 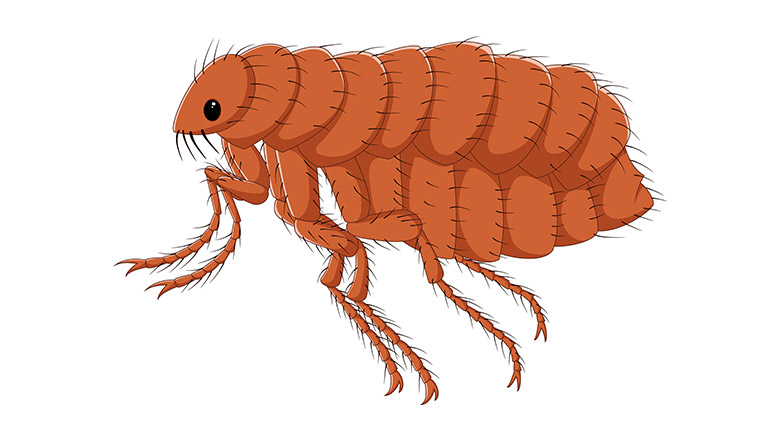 If you have a pet, it’s likely that at some point or another, you've encountered the odd flea.

These tiny, reddish-brown critters attach themselves to cats and dogs when they’re outdoors, then catch a free ride when they head back indoors. As well as infesting the animal itself, fleas can quickly spread around the house, becoming a big nuisance to all concerned.

As happy to feed on humans as they are on pets, fleas are known to transmit several very unpleasant diseases; if you’re under attack, act sooner rather than later by cleaning all infested areas and treating any infected animals. 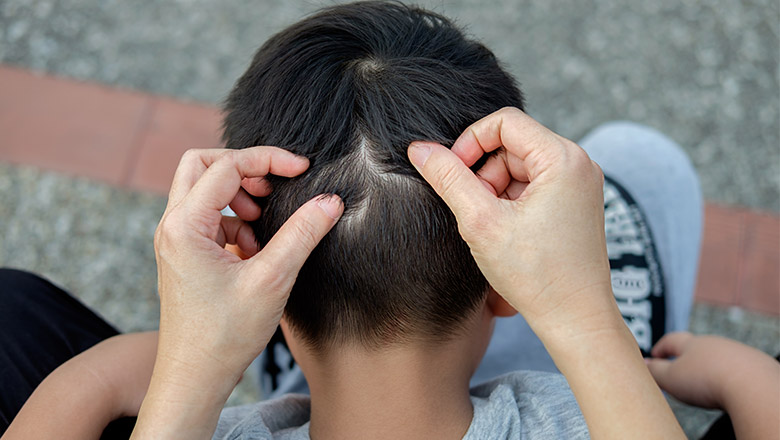 If you have kids, it’s likely that at some point, you’ve come into contact with the first variety.

With school and daycare facilities being their perfect breeding ground, lice will happily skip from one child’s head to another’s, hitching a free ride home in their hair.

Body lice, meanwhile, can be spread either through direct contact with someone already infected, or through bed linen, clothing, and towels.

Lice bites can be painful, resulting in scratching or even, in some cases, to secondary bacterial infections. 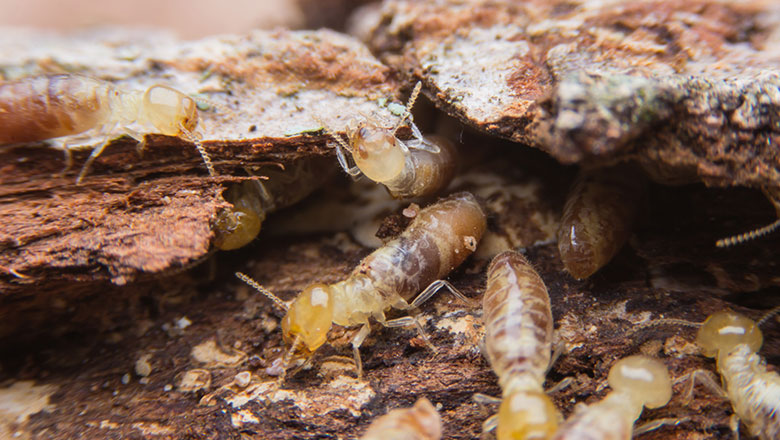 Termites rarely travel alone: if you spot one, then prepare for a swarm.

Known as the “silent destroyer”, termites can hide away in your home for months without making their presence known, happily munching away on your house’s foundations, drywall, furniture, books, and shelves until the cost runs into the thousands.

In America alone, termites cause more than $5 billion in damage each year.

If you spot any evidence of their existence (wood that sounds hollow when tapped, discarded wings, or mud tubes on exterior walls), call the professionals straight away. 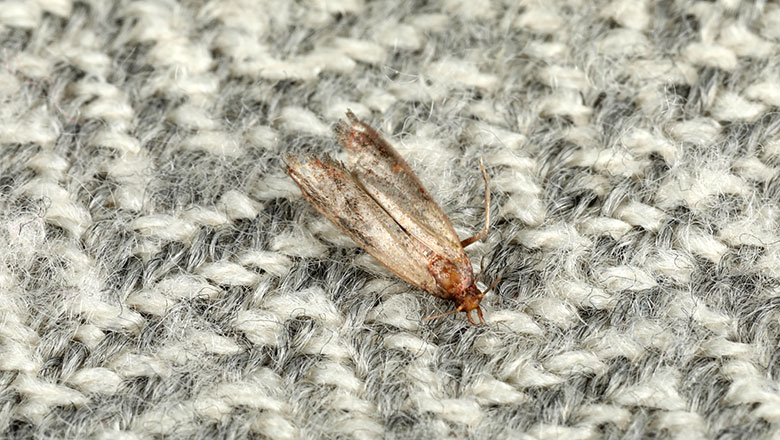 Most moths in the home are nothing to be worried about: other than taking an occasional nibble on your plants, they’re essentially harmless.

Clothes moths, on the other hand, are another matter altogether. With their preference for dark, warm, humid spaces and dirty clothing, clothes moths can ruin any clothes made of wool, mohair, cashmere, fur, and feathers before you can say “exterminator.”

That said, it’s not the moths themselves that cause the damage, it’s their larvae.

As prevention is always better than cure, rob them of their natural habitat by keeping all clothes made of natural fibers in plastic storage bins or compression storage bags. 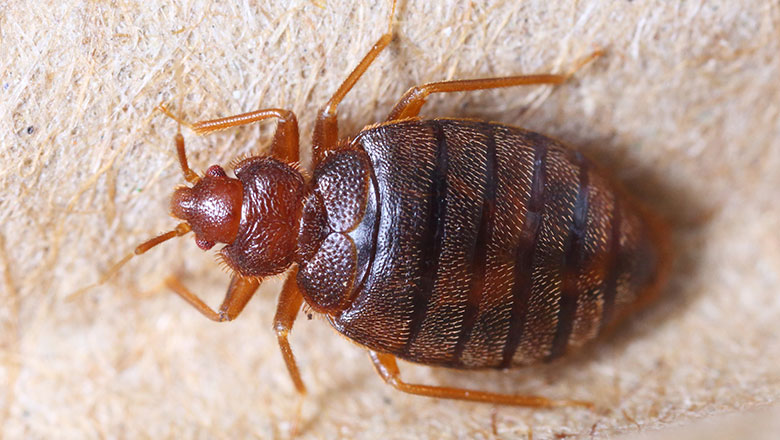 Just one bed bug can spell big trouble. Within the space of just three months, a pregnant female bed bug can infest your home with 300 new playmates and a whopping 1000 eggs.

Sneaky, hard to find, and as liable to take up residence in your carpets, rugs, linens, and furniture as they are in your bed, these little critters are one of the most common (and unwelcome) types of household pests around. 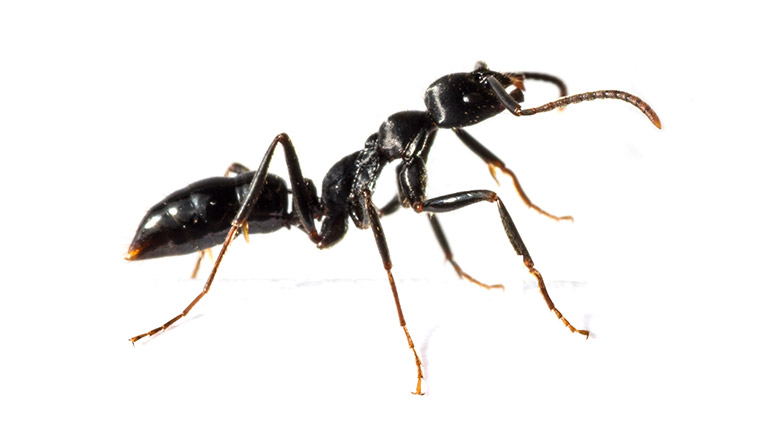 Ants travel in packs; if you spot a lone ranger, be sure his friends and family will be along shortly.

Although they tend to stay outside during the summer, ants can sniff out food a mile away and will make use of any crack, crevice, or space to make their way into your kitchen and dining room.

The best way to stop them from making your home their permanent base is to avoid leaving any food or dirty dishes around and to clean up any spillages as soon as they happen. 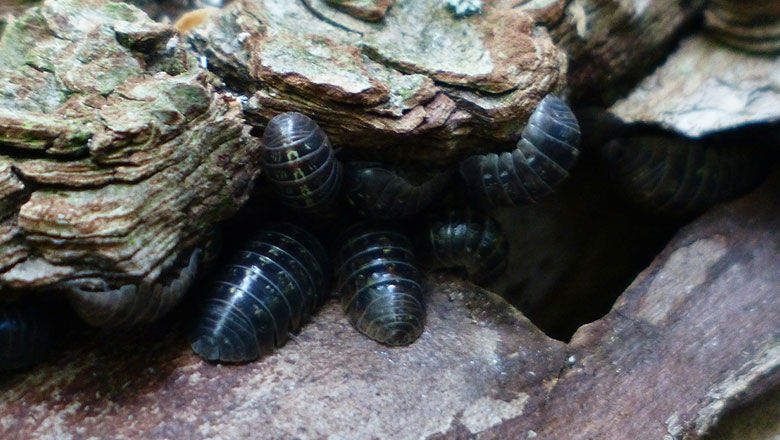 During the warmer months, woodlice live happily outside.

During the colder months, they’ll seek shelter from the chill by sneaking through small crevices and cracks in your house to take up residence in the warm, humid conditions offered in basements, bathrooms, and below kitchen units.

Although they pose no threat to humans, a sizeable enough population can cause superficial damage to wooden furnishings.

Simply sweeping them into a dustpan and moving them into the garden is the best form of removable, while maintaining dry conditions will be enough to prevent them in the first place. 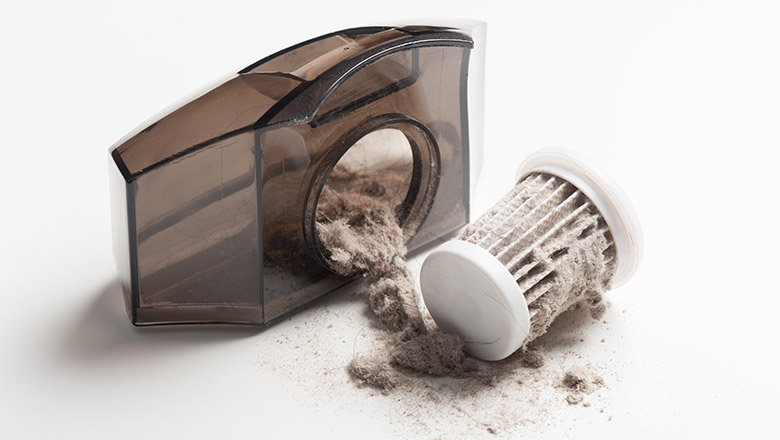 Fun fact: a used mattress can have anywhere between 100,000 to 10 million mites inside.

Another fun fact: 10% of the weight of a pillow is likely to consist of dead mites and their droppings.

With a love for warm, moist surroundings and an appetite for dander (or in other words, human and animal skin flakes), beds and mattresses provide the ideal stomping ground for these little pests.

While disgusting, dust mites pose little actual harm to most people. That said, their cast skin and feces contribute hugely to house dust, posing a risk factor to those with a predisposition to allergies. 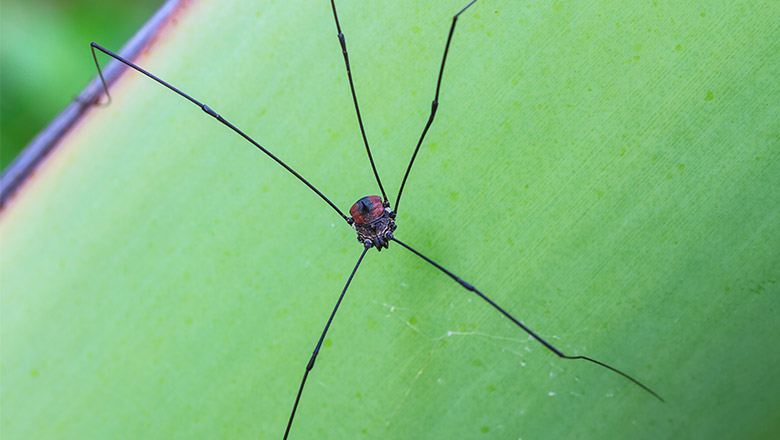 With their long, antenna-like legs and scuttling movements, harvestmen (or daddy longlegs) are one of the most easy-to-recognize household critters.

Like spiders, harvestmen can get into your house through almost any crack or hole they can find; once in, they’ll make for dark, damp areas like your basement, garage, or crawl space.

Despite not being the prettiest of creatures, daddy longlegs are essentially harmless, posing neither you nor your home any risk.

If you do want to get rid of them, simply sweep them up and pop them back outside. 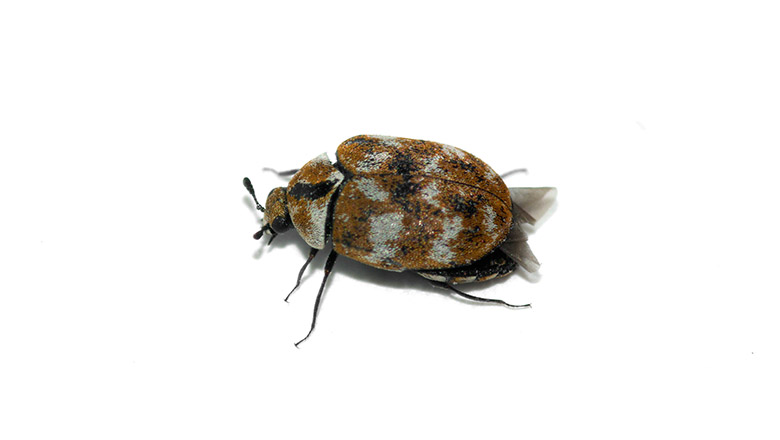 Short, stout, and emblazoned with an orange/red stripe down their middle, adult carpet beetles are the galloping gourmands of the insect world.

When it comes to their favorite activities, eating tops the list- and unfortunately for you, they’re not picky about what they shove in their mouths. Whether it’s fur coats, cereals, old pet foods, furniture, or carpets, carpet beetles will chow down on pretty much anything.

As they’re winged, they can easily make their way into the house through an open window or door… and once they’re in, it’ll take a lot of liquid pesticide or even a professional exterminator to get them out again.