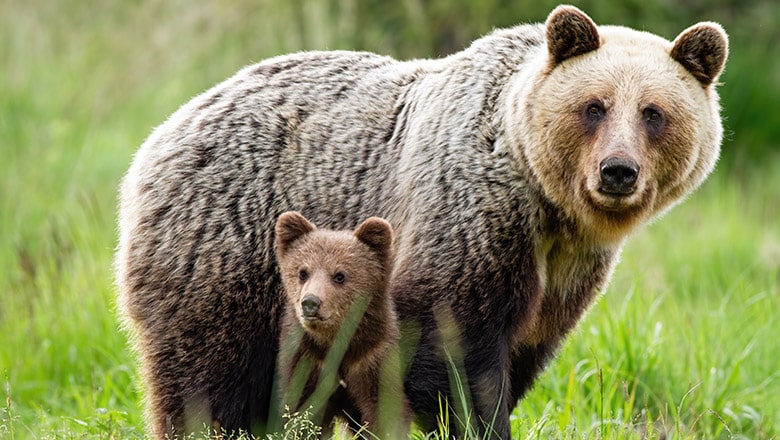 How To Survive A Bear Attack

If you are a person who loves wildlife, camping, hiking, or any outdoor activity that involves going into forests or natural habitats little inhabited by humans, there are certain situations when you might have an unfortunate encounter with a wild bear.

There are more bear species around the world, but we are going to speak in this post about the two common species: the Black bear and the Brown bear (also known as Grizzly bear).

This page contains affiliate links, which means we receive a commission from qualifying purchases.

Most bears usually avoid people and the bear attacks are very rare.

Some experts even say that it’s way more likely to die from a lightning strike than from a bear attack.

In recent years, due to the climate changes and deforestation, the cases when bears have attacked humans have increased.

There are three main reasons when a bear will attack:

Almost all the recorded bear attacks in the wild have emerged because humans have suddenly appeared in front of the bears. According to Tom Smith, a US Geographical Survey research biologist, the hunters are the people most at risk of bear attacks because they typically aren’t making any noise.

Once surprised, a bear will instinctively become aggressive and the chances to attack humans are very high.

According to Wikipedia, in North America, there are three species of bears with the most records on human attacks: the Brown Bear (commonly known as the Grizzly Bear), the American black bear and the Polar Bear.

How To Avoid A Bear Attack

Undoubtedly, the best thing you can do is to avoid a bear attack as much as you can.

Make the animals aware of your presence

If you walk through an area where you know that there are dangerous bear species, you should make the animals aware of your presence. The last thing you want to do is to surprise a bear.

Even if you might think that the best approach would be to just don’t make any noise and sneak through, the bears need to know that you are coming and most often, they will just get out of the way.

You can make noise by singing, speaking loud, with occasional shouts, or even by wearing bear bells. That should make the bear run away most of the time.

Even if the bear has spotted you, you should try first to back away slowly, without making any sudden movements and you should be avoiding staring directly into the bear’s eyes. If it doesn’t feel threatened, there are high chances that the bear will not attack.

Your chances decrease drastically if you encounter a female with cubs, a bear that is feeding or a bear species that is mainly known for its aggressivity, such as Grizzly bears.

If there are no signs that the bear would back away and the attack is inevitable, there are a few different approaches based on the species of the bear.

Travel in a group

A proven way to avoid a bear attack is by walking in a group of people. The larger the group is, the fewer chances are for a bear to attack.

There have been no bear attack records when a bear has attacked a group of six or more people. Therefore, traveling in a group is an excellent way to prevent a bear attack. You should never go into the wilderness alone, especially into the bears’ territory.

Do not throw food scraps near the camp

If you are camping, do not throw the food scraps near your camp. Bears have a very well developed sense of smell, and they will be attracted to your campsite if they feel the smell of food.

Dogs can sometimes keep bears away from your camp, but very often, a dog can also attract bears to your camp or to you.

How To Survive A Bear Attack

There are different approaches based on bear’s species and you will probably receive different bits of advice from different sources. However, we are going to share with you the most common approaches to surviving a bear attack.

If the attack looks inevitable and the bear doesn’t seem to have the intention of giving up, the first rule is to NEVER RUN.

We all know that your instinct will tell you to run, but that’s actually the worst thing you can do. Despite its massive weight, a bear in a healthy condition is faster than you and your chances to outrun it, are extremely low. Unless you are Usain Bolt, of course. Then you would have a few extra chances.

So, NEVER run from a bear. That would only activate the bear’s hunting instincts and will see you as potential prey and chase you down. A healthy young bear can reach very quickly 25-40 miles an hour and they are also very good climbers, so don’t put your hopes in a tree.

The next thing to do if a bear seems to charge is to stand your ground.

Very often, the bears are just as scared of us as we are of them and they may only superficially charge and then retreat. Just stand your ground at first, try to slowly walk away, talk to the bear in a calm tone and don’t stare the bear in the eyes since the animal will perceive that as a sign of aggression.

How To Survive A Black Bear Attack

You need to know that the Black bears have short claws, are smaller than Grizzlies, aren’t extremely aggressive and are easier to intimidate.

The Black Bears are known to be often more timid than Grizzlies, and you have some chances to avoid the attack with an intimidating plan, such as making loud noises, trying to look bigger than you are, etc.

An average male weighs between 68-158 kg and can reach more than 2 meters in height when standing up.

If you are attacked by a Black bear, you have to fight back with whatever can get your hands on (weapons, knives, stones, sticks, etc.) and make as much noise as you can.

If you get the chance, hit the bear’s most vulnerable parts, such as eyes and nose. Hopefully, the Black bear will get scared and will run away.

How To Survive A Grizzly Bear Attack 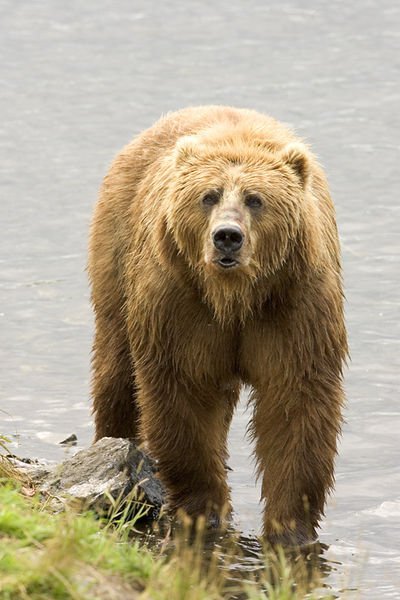 Unfortunately, the Grizzly bears are not as easy to scare as the Black bears.

The brown bears are larger, more aggressive and more dangerous than the black bears.

While you are advised to fight back in the case of an attack of a Black bear, you shouldn’t do that if you are attacked by a Grizzly bear.

You stand almost no chances in a direct fight with a Brown bear. These bears can reach more than 600 kg in weight and can have over 2.5 meters in height when standing up. They also have a thick fur, huge and curved claws (7-10 centimeters), powerful jaws with large canine teeth.

The Grizzly bears cannot typically climb trees, but in isolated circumstances, adult female brown bears have been seen in trees.

These bears will not get scared and will not run from a fight. Fighting back will only make your situation worse and will result in even more aggressive attacks from the bear.

If the worst-case happens and the bear attacks you in full strength, throw yourself on the ground in the fetal position and play dead.

If you have a backpack, don’t throw it toward the bear. Instead, leave the rucksack on your back and use it as protection between the bear’s claws and teeth and your back.

Use your arms to protect the back of your neck, face, and head and curl as much as you can to keep your vulnerable parts safe.

The most obvious defense against a bear would be a fire gun of any kind.

However, since not all of us are hunters and not all of us own or we are allowed to carry a fire gun, then the most effective bear protection is a bear spray.

A bear spray is a highly-concentred pepper spray based on capsaicinoids (same as the pepper spray used by the police forces, but about three times more concentrated, depending on the manufacturer). If you spray it into the bear’s face when the bear is close, the bear will run away and leave you alone.

A bear spray is a self-defense weapon that we all hope that we never have to use. However, it’s “a must” for all the hikers, campers and all the people who go into expeditions into the wildlife.

Even though the bears do not attack people too often, knowing how to survive a bear attack, might just save your life one day in the unfortunate case of an encounter with a bear in the wilderness.

In the event of a bear attack, you have to be able to maintain your calm, identify the bear species and apply the techniques learned in this article.

When you pass through areas populated by bears, only travel in a group of people, do not throw food scraps near your campsite and make noise while you walk to let the bears know that you are there.

While the techniques presented in this article are meant to maximize your survival chances in front of a bear attack, no one can really anticipate the bear’s reaction. If you often travel to places frequented by bears, I highly recommend you to buy a bear spray. This spray will discourage any bear attack and will save your life.

I hope you’ll never have to apply what you’ve learned in this post, but if you do, make sure to be prepared.